How to use row covers 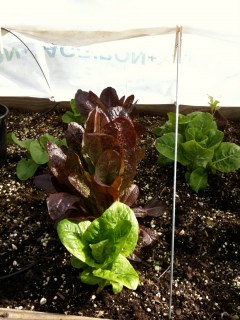 Wow. What a difference this stuff makes. Suggestions: use wooden clothes pins for an inexpensive, easy-to-remove fastener on top of the wire frames.

Between these covered beds in both the raised bed section and the food forest, our cold frames, and our hot beds, we’ve been eating well and have a serious jump start now that spring sunshine has arrived.

The new and improved American “empire”

Dr. Thomas Barnett is a seriously smart fellow. I hope his ideas spread far, wide, and deep into our society so we can see change along the lines that he offers.

Note a couple of items:
1. This speech is at TED, which typically leans heavily towards the Left side of the political spectrum and eschews war and violence. But despite his aggressive, military-tough talk, he gets a standing ovation after his conclusion. His sense of humor certainly helps, but those folks (and myself) were applauding his research and plan.
2. Dr. Barnett replaces an international American Empire (based solely on a Leviathan Force) with an international American System Administrators Force. Given that our empire is crumbling fast, it is a brilliant transition. There are lots of other folks talking about our crumbling empire, but this is the best roadmap that I’ve seen to divert us from that destructive path.

A quick check-in on my goals set out six months ago….here were the topics:

Overall, I’m pleased with our progress. It has spurred many conversations re: emergency preparedness with others in our small town, with both old and new friends.

And I’ve avoided getting cauliflower ear so far in MMA training. Thank goodness for arnica

MMA for self defense, not sport

When describing my 3X weekly training sessions I do during my lunch break, I’ve found the easiest, most accurate description is “MMA for self defense, not sport”.

For those that even know what MMA is (“mixed martial arts”) they immediately understand the reference to it not being for sport. In regulated MMA bouts, there are many things off limit, like the gouging of eyes, striking of throats, and kicking of groins. Exactly the type of techniques you want to use in a real life self defense scenario!
For those who know martial arts, I can usually make reference to studying MMA from an aikido perspective and they at least begin to understand why. I’ve been asked if this is Hard Aikido. It’s really not. Hard Aikido appears fairly effective (and darn cool), but it still involves just too many complex moves, and suffers against attacks that are based in grappling.
The Hard Aikido moves are beautiful – a true art – but the spheres involved are just too large. The aikido that my sensei is drilling into me uses very small spheres, usually transitioned to by something in Brazilian Ju-Jitsu, Muay Thai, or Wing Chun, depending on the distance of the original attack. Spheres? What are spheres, you ask? Learn more.
For those who have no idea what MMA refers to, they still understand the “self defense, not sport” reference refers to my lack of interest (but not respect) for progressing to higher levels (belts) or doing sport competition. It’s simply me, my sensei, and a desire to learn very practical techniques to protect my family and friends.
I put together the attached diagram to quickly describe what our training is beginning to look like in a flowchart manner (because I’m a dork for diagrams). It’s based off a quick flowchart my sensei drew (as an artist, he also tends to diagram alot; we have a whiteboard in the dojo).
As you go through life, you practice continuous, calm awareness, noted on the left side of the diagram. When a situation progresses from normal (green) to cautionary (yellow) to immediately dangerous (red), my hope is that I train my mind/body to respond automatically in those high stress situations.
Scientific writers describe this auto response as an “autonomic reaction” – an automatic response of the mind and body at a subconscious level. Aikido writers refer to this “move second, strike first” concept as harmonizing, or welcoming the attack. Your awareness to an attacker (moving first) enables you to blend with the attack (moving second) and still land the first blow (striking first). The blow might be a parry done while spinning to one side, but if done in the correct “always thinking forward” mindset, the first strike disables the attacker’s would-be blow.
Of course, the primary goal would be to evade those situations anyway, even before they hit the caution stage.
There are thousands of techniques in the various martial arts that we *could* study, but won’t. Unless you are logging decades of concentrated study inside a dojo, all those techniques just won’t work in a high stress situations when your “fight or flight” adrenaline has taken over your brain and body functions. But if you know a few relatively simple and fast techniques very, very, very well, the mind/body should be able to protect you and your loved ones when it goes into auto-drive.
This is what I am striving for in my training.

I get asked often what type of “weapons training” I am doing that does not involve guns. The basic answer of “I train with a stick” usually solicits blank stares in return. Look up a few videos on YouTube like these to see how powerful a practiced stick defense can be:

Arnis (shows transition from stick fighting into unarmed self defense):

Take a moment to look around you and realize just how many “sticks” are within reach as you go about your day. For me, there are usually plenty available (a.k.a. rake, walking stick, tree branch, baseball bat, rebar, shovel, etc).
Warning: take a note from Kip in Napoleon Dynamite. You might not want to train to be a cage fighter by just watching videos. Head to your local dojo for real instruction and full armor/speed practice.
🙂

Ugh. I feel like I’ve survived death. Swine flu is *not* fun. I picked up the bug on a plane ride back from Chicago. Just finished four days of misery.

Thank goodness for Oscillo, N95 masks, and a loving spouse. All this preparation is for naught if you don’t have the right supplies on hand when you need them. Your health is everything; tough to enjoy the fruits of your Food Forest when you’re stuck in bed sick as a dog!

Water security. For me that means we could use as much water as we want to irrigate our food crops, even in the middle of a drought. For me, that means a significantly sized source of potable water to use in an emergency. And for me, that means harvesting rainwater.

The nearby sketch shows the setup we built over the past three weeks. We’re harvesting rainwater from the roof gutters, into a “trash can” silt catcher, through to a 3P Technik VF1 Volume Filter, past a 4″ first flush diverter, and then into a pair of 2500 gallon cisterns. Extra rainfall can be diverted into an existing large diffuser once the tanks are full.

Water then passes through a Graf floating inlet filter with 8’’ hose to be pumped back up our hill out of the tanks with a new Grundfos MQ 3-45 1HP 110v pump, feeding the two yard hydrants near the food forest and one yard hydrant near the house.

From sketch to completion…look in this slideshow for more photos.
This water storage book – although quite short – was by far the most useful. I could not find several components locally, so I ordered them from Rain Harvest.
Now to go clean up the construction mud and replant grass for the chicken tractor…

Nothing like training on mixed martial arts with a bias towards real self defense to help you discover new ways to bruise your body.

This bruise looks suspiciously like the thumbprint of my sensei.

An experiment in simplicity

For an interesting, first-hand analysis of what an economic collapse in the US might look like in comparison to what happened to Russia a few years ago, pick up a copy of Dmitry Orlov’s book Reinventing Collapse: The Soviet Example and American Prospects at your local library.
You can also head over to the Energy Bulletin website to read through his slide presentation on this topic. Strangely enough, he’s made a dire topic actually enjoyable to read about.
Simplicity certainly plays a large role in this new Emergency Planning world, whether it is forced (as described in Orlov’s descriptions of Russia) or voluntary (back-to-the-land folks).
In other realms, I’ve experimented with forms of voluntary simplicity, usually related to technology since I’m a computer geek. A year ago I switched to Macs for the first time in my life. Definitely a more streamlined user interface reflecting Steve Job’s passion for “less is more”. I’m using only the standard “out of the box” applications for most of my productivity (Mac Mail, Address Book, iCal, etc).
More recently, I’ve begun using a smart phone (iPhone 3GS) instead of laptop to run my company (and most of the rest of my life). It certainly makes business travel simpler and multi-tasking easier (e.g. weeding my vegetable garden while talking to my salespeople after reviewing a spreadsheet).
I certainly hope we can retain the “simple life” as a voluntary experiment, rather than a forced scenario.

Protecting your cash assets from hyperinflation

For a great summary on how we got into the mess we’re in, check out the NPR podcast “Return to the Giant Pool of Money“. If you don’t use iTunes, do a search for episode #390 of the This American Life show from Chicago Public Radio from just a few weeks ago.

In the podcast, they mark the anniversary of the economic collapse: recapping some of the original episode and finding out what’s happened to the folks featured in the story in the year since.

My main takeaway: the economic collapse was not something They did, but something We did. We (you and I) are the global pool of money. This is not something we can blame on Wall Street, but on basic human greed, seen at a catastrophic global scale.

And while we’re talking about money, you might look into just how secure (or not) your bank account is. Use this tool and go for B+ or higher rated bank.