Updated the food forest pathways, replacing the temporary stairs, which were mighty uncomfortable with my incorrect rise over run. Went back to the same permaculture crew that designed our food forest on paper and hired them to fix my mistakes in traffic flow through the garden. Wow. Awesome ideas.

We got the rough cut boards from a neighbor with a backyard saw mill.

The joys of garlic 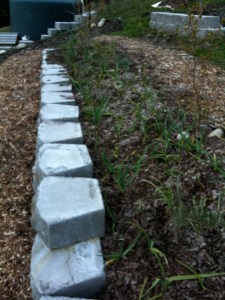 This photo does not really do justice to how exciting of a scene this is: 50′ of garlic. About eight varieties.

Anytime someone is our family gets sick (which is often with little kids), we cook with garlic for  a week and it seems to keep the cold/flu from rampaging through the entire family. It’s pretty cool to see a two year old pulling cloves out of the baked garlic, mashing it on homemade bread, and scarfing it down.

This book was particularly helpful for selecting garlic that does well in our area, planting it right, and learning how to harvest/store it to last for months: Growing Great Garlic: The Definitive Guide for Organic Gardeners and Small Farmers

Oh my gosh, I cannot wait.

Adding potatoes to the garden

Back from another teaching gig and reinvesting in the garden.

Down in the food forest I added two sets of potatoes as an experiment. The first section is the fairly straightforward trench method so we can do hilling. I dug ~ 200′ of trenches, some in their own dedicated beds and some snaking around our new berry bushes and more two year old fruit trees.

In another section of the food forest that had a site prepped but no topsoil/compost (because I got tired of hauling compost this past summer) I added a line of buckets with potatoes in them. The plan is to add a second vertical layer of buckets (with the bottoms cut out) on top of these as we add more dirt to them during the hilling process. 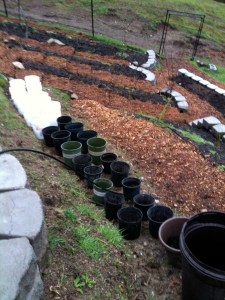 I went with the buckets for the experiment (and a random trash can) rather than the more popular towers since not many folks actually *doing* the towers were getting good results. I found lots of articles citing the wonders of potato towers written by journalists, but it was clear none of them had actually planted these and watched over them for a season until harvest time. On the other hand, there are many more blog entries by folks actually doing the planting/harvesting with buckets.

And I had truckloads of extra buckets left over from planting the berry bushes and runs to the local deli/bakery for food grade 5-gallon buckets. Reminder: drill holes in the bottom for drainage.

The best part? At the end of the season, I spill the buckets over right where they are in the food forest to make a new bed for a different crop next year. Instead of hauling four yards of dirt down the hill in one day, I do it in small batches over several months…

Hauling manure with a longtail bicycle

I built a set of “hot beds” to start seedlings last week from scrap lumber and Freecycle window frames. Hot beds are simply cold frames that have some heat source to warm the seedlings in the winter, allowing them to grow faster than an unheated greenhouse or cold frame.

I wanted to experiment with a non-electric heat source, which pretty much just leaves manure. Under the sloped glass roof of the hot bed, we now have 18″ of manure, covered by 6″of dirt, to provide plenty of extra heat for the vegetable seedlings to get a kick start on growing prior to Spring. We’ve got them located on the North side of our property, sloped to the south, to grab as much winter sun as possible.

The cargo bike and Wike trailer did great hauling this load, although the stable owner clearly thought I was nuts showing up with a bicycle to haul manure.

I’ve been testing the replacement eZee battery this past week; getting about 7MPC. Better than the previous 5MPC, but no where close to the claim 20-25MPC in the eZee documentation. Buyer beware.

Moved our kiwi trellis out of the food forest and up close to the house where it can be hidden from view for just one reason: my wife thinks it is ugly.

And she’s right. The rest of the food forest is quite beautiful with the fruit trees, berry bushes, and recently completed low retaining walls. The kiwi trellis (for both fuzzies and hardies) is three 4×4 posts sticking seven feet up in the air. They are ugly and will stay ugly for several years until the kiwis cover them (they grow like grapes) or the nearby fruit trees get tall enough to screen them from view.
So I took a few hours and moved them before they got settled in their new/old spot in the food forest. Will think of how to keep the deer away later. Perhaps by the time the kiwi vines bear fruit (a few years from now), we’ll have big dogs back in our lives.

For true emergency planning, you need your garden producing food year round, even in the dead of winter.

This winter I’ll be experimenting with a few different methods, but one initial success is the use of Agribon 30 paper to seriously extend the growing cycle for crops that normally can’t hack the cold. We still have eight different types of salad greens growing strong under these Agribon covered beds. Great stuff.
We’re also focused on different recipes using crops that do well on their own in the cool winter here, such as kale and broccoli.

After we got the dirt/compost into the new beds (on top of cardboard to smother the weeds), we planted a collection of berry bushes. Varieties include seaberries, honeyberries, raspberries, gooseberries, goji berries, goumi berries, and elderberries. We found this permaculture berry guide to be very helpful. We also brought in four more types of grapes and kiwis, both hard and fuzzy, to train along a new trellis.

To combat the strong pasture grass, we’re planting comfrey and nasturtium. Comfrey is not only a great chop/drop fertilizer, but also good to accelerate compost heap decomposition and supplement the chicken’s feed. It also acts as a fortress plant, weaving a thick root system to choke out the pasture grass.
We’re leaving two full beds open to plant potatoes in the Spring. Each fruit tree will have a guild built around it, with strawberries and other beneficial plants.
Free wood chips from local arborists line the walking paths (again, laid over wet cardboard). Food Forest version 1.0 is almost complete, just in time for the rains to begin. I’ve already started making my list of version 2.0 improvements to tackle next summer.
More photos in this slideshow.

We’re creating our version 1.0 food forest. It’s a system of food crops arranged to mimic a natural’s forest ecosystem. Our fruit trees are the top canopy, berry bushes the mid-canopy, with normal vegetables making up the remaining forest layers.

It’s been fun to build, although quite a bit of work and I blew my budget by a factor of 3X. Several times during the construction I wondered if this was my version of a mid-life crisis. It probably is. Oh well, it least a food forest is more productive for my family than a little red sports car.

We started with this sketch of an existing site on our property where I had installed deer fencing and drip irrigation already for 15 fruit trees and a handful of raised beds. I had already chipped rough stairs out of our heavy clay soil. We laid out the pathways between the existing two year old fruit trees with tape. We then brought in 30 yards of compost/dirt to build the new mounded beds.

This is the second of two loads. The first 15 yards of compost/dirt only made three beds (you can see them in the background). We could probably use a third load, but I’m *really* tired of hauling dirt up and down this hill. We’ll expand next spring for version 2.0.

Note to self: a truck containing 15 yards of moist compost/dirt is pretty darn heavy. Heavy enough that it will snap any irrigation piping in the ground that it rolls over. Oops. This one only cost me $4 to fix, but several hours of digging to find the broken pipe.

Next up, planting the mid-canopy berry bushes for the food forest and lining the paths with wood chips.

I mentioned a “food forest” we’re working in several posts. Here’s a bit of background and an image to explain what that is….

After reading a few permaculture books (Gaia’s Garden was the best of the bunch), we hired a local expert who lives in our town to come over and discuss specific ways to implement permaculture in our yard. One of his interns created a nifty set of drawings like this one of a food forest to provide guidance.
Not a bad investment of $250 for several hours of their time, ideas, and delivered sketches. We’re using an area in which I already had deer-proof fencing and irrigation piping.

Feeling good about your work to become more self-sufficient? As I am building out our food forest (photos soon), I was feeling a bit smug about it actually. Until I took the time to think through the 100 foot challenge. Yikes. We’ve got a long way to go.
But growing your own food is worthwhile, and it is radical. One of my new favorite quotes is from Jules Dervaes, the urban farmer and founder of Path to Freedom.

“Growing food in one of the most dangerous occupations on the face of this earth, because you are in danger of becoming free.”