← Colorado comes to Washington
Big moves for the fall → 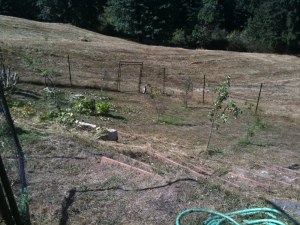 Ah, the wonderful change of seasons in the Pacific Northwest.

One benefit of the increased rain flow is the quick refill of our water cisterns after flushing them a few times for cleaning. 5000 gallons refills in just a week or two. Man, that’s a lot of rain.

This month marks the fifth anniversary of our permaculture food forest. Many, many lessons learned (and some – like how to grow corn – still elude me). The current food forest has 15 fruit trees (eight varieties) – each with it’s own guild of flowers, herbs, and comfrey for chop/drop fertilizing – 13 berry bushes (six varieties), and an increasingly shrinking amount of space for ground crops like garlic, potatoes, and hot peppers. In the coming years, we’ll need to move down the hill for additional growing space, but the new hugel bed has an amazing amount of growing space.

You can see the before and after images here (notice the five year improvement in iPhone cameras as well). Click the panoramic image to view full screen. The posts on the far left are one year old grapes to take advantage of the heat that big black rock wall puts off.