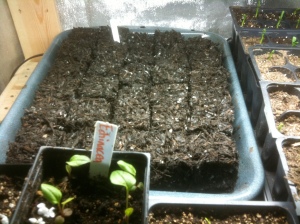 In an attempt to streamline seed starts, we’re experimenting with creating our own soil blocks (they look like brownies in this photo).

While the literature touts this as a great way to eliminate those little plastic seedling pots from your life, I’ve not found them to be such a hassle. We salvage them from local nurseries and they store relatively compactly. Yes, they are made from oil, but so is the big plastic tub in which we’re mixing our soil blocks. At least this tub will last forever; the seedling pots are quite flimsy.

With soil blocks, you “pot up” a smaller block into a larger block, and eventually into the ground itself, all without ever removing the seedling from it’s surrounding soil.