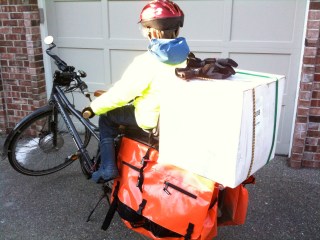 Finally made time to diagnose what’s going on with my eZee electric hub system. Technically speaking, it is busted. Sucks to be me. I am an electrical idiot, so the advice of the eZee vendor of “use a multimeter and find the short” was more than a bit daunting. But that’s exactly what I did and successfully found…nothing.

So I called in a professional electrician (read: $$) to diagnose it and he too found nothing. Yet additional test rides produce the same frustrating results: you are pedaling along like normal, you hit a hill and engage the eZee system and you get…nothing. Well, actually, you get some rapidly blinking random lights from the LED, but nothing from the battery. Try it again in a minute and you get no lights but only 10% of the power from the battery. Try again in another minute and you get nothing from either the LEDs nor the battery.

All connections have been triple-checked and tested. Battery has full charge. And I’m on smooth pavement; no bumps. Frustrating to say the least.

So I’m back to my original ride (a 10 year old, street-converted, dual suspension Klein) and significantly less hauling capacity. Which leaves me with a bad-and-getting-worse experience with the eZee electric hub system. Not recommended.

I’m still under warranty, but the New York vendor is not being terribly helpful, partially because it is difficult to diagnose what’s going on with a system from afar. Hoping this does not turn into a case of Buyer Beware. Definitely make sure your local bike shop can support the system before you buy it (e.g. they’ve got a mechanic who is electrically inclined).

On the plus side, it appears the crew at Down Low Glow figured out they had a bad batch of components for their dual-tube system. The third set of replacement they sent appear to be working well. Kudos to Leif and their crew for not giving up. Recommended.